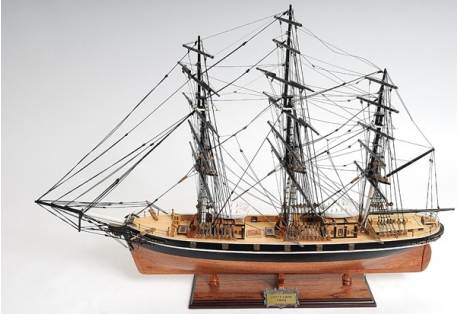 The name of the Cutty Sark tall ship comes from the short shirt worn by the flee-footed witch in the Robert Burns Poem, Tam o'Shanter. Designed by Hercules Linton in Dumbarton, Scotland, the Cutty Sark was launched in 1869. The Cutty Sark was initially designed and meant for trading tea with China. Crafted to race across the globe to sack immense profits before other European traders, the Cutty Sark was built for speed. In the memorable race between the Cutty Sark and Thermopylae in 1872, the Cutty Sark lost her rudder after passing through the Sunda Straight and arrived in London a week after their competitor. What makes the Cutty Sark the hero of this race was that she continued the race with a makeshift rudder instead of putting into port for repairs, and in spite of that only lost by a week. Inevitably, the clipper ships lost out to the more powerful steam boats, which were more reliable, and thus returned goods more consistently. The Cutty Sark won the reputation as the fastest ship in her size when she ran 360 nautical miles in 24 hours during a run for Australian Wool trade. The Cutty Sark is the world's sole surviving extreme slipper, with the majority of her hull fabric surviving from her original construction in the 1860s. The Cutty Sark is preserved as a museum ship in Greenwich, which is in south-east London.