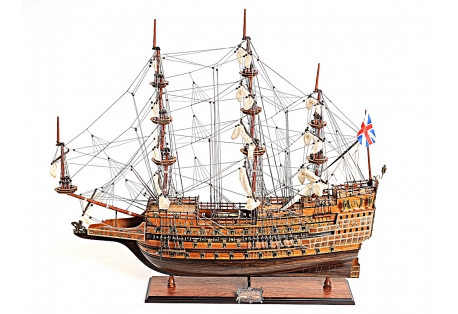 This is museum-quality, FULLY ASSEMBLED replica of H.M.S. Sovereign of the Seas, a first-rate ship in the British Royal Navy for more than 50 years in the 1600s. This is an “Exclusive Edition” where the model has a unique serial number etched into the hull, which allows us to identify production date, material used and all other production information of a model.Master craftsmen using historical photographs, drawings or original plans meticulously handcraft these highly detailed wood models from scratch. They are built to scale with high-grade wood such as: western red cedar, rosewood, and mahogany. They are 100% hand built individually using plank-on-frame construction method and are similar to the building of actual ships. Each model requires hundreds of hours to finish and must go through a demanding quality control process before leaving the workshop.This magnificent Sovereign of the Seas model features plank on frame, three decks, and three rows of ferocious cannons on each side of the ship. A unique bowsprit design that consists of: brass statues and crafted brass ornaments on the panels. The front bowsprit and three large masts are connected securely using advanced rigging and lines painstakingly knotted and fastened by hand. Each yard has an attached hand-stitched rolled-up sails made of fine linen. Metal anchors and a wooden rudder are visible on the front and rear of the ship. On the deck, there are metal stationed cannons, authentic hand-built lifeboats with ribs and planks, wooden cabin, and many other handcrafted ornaments. There is also an exquisite detailed admiral’s quarter on the stern with a beautiful handcrafted metal lantern, amazing metal crafted statues, and many other spectacular brass ornaments.This model comes standard with a solid wood base and brass nameplate. It’ll make a perfect gift for home or office decorator, boat enthusiast or passionate collector.

H.M.S. Sovereign of the Seas, launched in 1637, was the most powerfully armed ship in the world in its day. It was originally going to have 90 guns, but King Charles I personally insisted that a "great ship" be built for the English Royal Navy, so it went to sea with 102 bronze guns. The vessel was the most extravagantly decorated warship in the Royal Navy, completely adorned from stern to bow with gilded carvings. The ship was later renamed Sovereign and then Royal Sovereign. It was destroyed by fire in 1697 in Chatham.