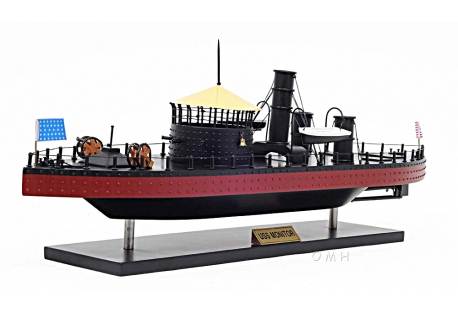 The U.S.S. Monitor, an ironclad warship, was built in 1862 during the American Civil War by the United States Navy in response to Virginia seceding from the Union. It fought against the C.S.S. Virginia in the Battle of Hampton Roads. It is available as a FULLY ASSEMBLED model ready to be proudly display as a piece of history.Master craftsmen handcraft these highly detailed wood models from scratch using historical photographs, drawings and original plan. They are built to scale with high-grade wood such as: western red cedar, rosewood, and mahogany. They are 100% hand built individually using plank-on-frame construction method and are similar to the building of actual ships. Each model requires hundreds of hours to finish and must go through a demanding quality control process before leaving the workshop.The U.S.S. Monitor exquisite details include: metal cannons, wooden small boats, pilot house, sky lights, US flags, Union Jack flag, smoke stacks and air intake stacks. There are black railing all around the ship and on the turret. The rivets on all armor plating make the boat look really cool. You can also see metal stanchions that support the turret roof panel.The hull is painted maroon and the upper deck is painted black to replicate the original warship. The model is secured tightly on a black solid wood base with a brass nameplate with the words “U.S.S. Monitor.” It’ll make a perfect gift for home or office decorator, boat enthusiast, or passionate collector.

U.S.S. Monitor was the first ironclad warship commissioned by the United States Navy during the American Civil War. She is most famous for her participation in the Battle of Hampton Roads on March 9, 1862, the first-ever battle fought between two ironclads. The Monitor fought the ironclad CSS Virginia (the former frigate USS Merrimack) of the Confederate States Navy.Monitor was innovative in several respects, including the first 360 degree rotating armored gun turret on an operational warship. The hull was completely underwater and was protected by an overhanging armored deck and armored "belt". Her keel was laid on October 25, 1861, and she was launched 118 days later.