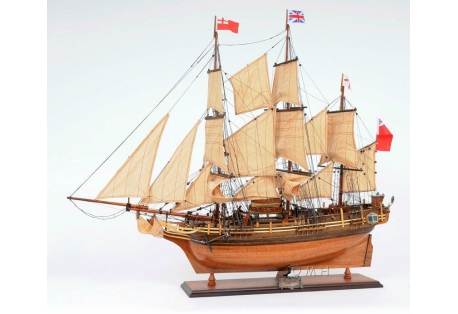 What got my attention was your ATD. It's what I call Attention to Detail. You don't show the ship from so many angles they're confusing. You also give a great description! Almost no one does that!

This is a museum-quality, FULLY ASSEMBLED replica of H.M.S. Bounty, the 18th century British ship made famous in the movie “Mutiny on the Bounty.”

This is an “Exclusive Edition” where the model has a unique serial number etched into the hull, which allows us to identify production date, material used and all other production information of a model.

They are built to scale with high-grade wood such as: western red cedar, rosewood, and mahogany.

They are 100% hand built individually using plank-on-frame construction method and are similar to the building of actual ships. Each model requires hundreds of hours to finish and must go through a demanding quality control process before leaving the workshop.

Each yard has an attached hand-stitched unfurled sails made of fine linen. Metal anchors and a wooden rudder are visible on the front and rear of the ship.

On the deck, there are metal stationed cannons, authentic hand-built lifeboats with ribs and planks, wooden crane, wooden windlass, bell tower, and many other handcrafted ornaments. There is also an exquisite detailed admiral’s quarter on the stern with a beautiful handcrafted metal lantern, amazing metal crafted statues, and many other spectacular brass ornaments.