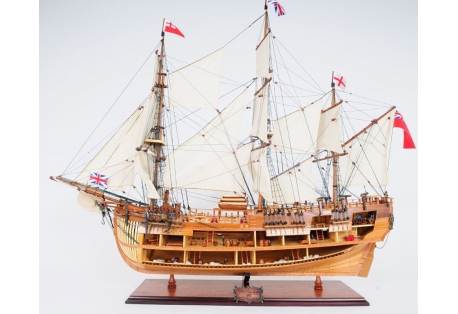 To recapture the beauty of the real ship into the model, we have used the most exotic wood that are available, the highest quality brass fittings that we can cast and more than 200 hours to put together this magnificent model. Examples of wood use include rosewood, western red cedar and mahogany. These materials are transformed into art pieces by the skillful hand of the master craftsmen.

If you look closer, you can see an evenly smooth surface of wood on the hull. It was done more beautifully then most pieces of fine furniture. Looking through the open hull, you can see furniture, painted service men, drums, stair cases, door which are all finished in great details.

The art of wood working is quite impressive on the hull & decks. Other magnificent details include metal sculptures, brass canons and anchors, wooden life boats and sky light... The model comes with its original British Royal Navy flag and rest on a steady wooden base with attached metal name plate. 100% assemble, ready for display.

In 1768 Lieutenant James Cook, Royal Navy, set sail on HMS Endeavour on a voyage of exploration and scientific investigation and through his journeys. Cook was considered to be one of the greatest explorers. In 1770 Cook reached New Zealand where he circumnavigated and completely charted the north and south islands before continuing west. In April, he sighted the east coast of Australia and sailed north along the coast before anchoring in what he named Botany Bay. He then continued north to Cape York and on to Jakarta and Indonesia. During the four months voyage along the coast Cook charted the coastline from Victoria to Queensland and proclaimed the eastern part of the continent for Great Britain. Cook was the first person to accurately chart a substantial part of the coastline of Australia and to fix the continent in relation to known waters.