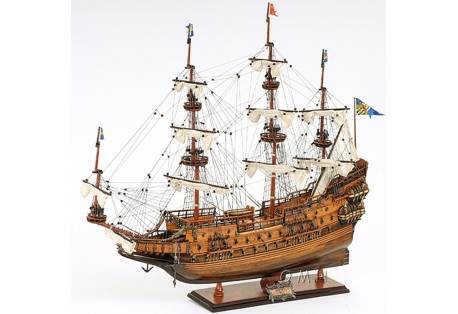 This is Museum-quality, Fully Assembled edition of the Wasa. It is part of an exclusive edition where the hull is laser cut with a unique serial number. The model is 100% hand built from scratch using “plank on frame” construction method.
Our master craftsmen have spent more than 100 hours to finish it.

One bold feature that makes this model standout is the art of wood use. Rosewood, mahogany, teak and other exotic woods are carefully selected to accent each part of the model.

This replica has magnificent details which include metal anchors and cannons, authentic crows nest, advanced rigging, rolled sails and an ornate stern. No plastic parts! Comes on a solid wood base, with metal nameplate.

Vasa was built top-heavy and had insufficient ballast. Despite an obvious lack of stability in port, it was allowed to set sail and foundered only a few minutes after it first encountered a wind stronger than a breeze. The impulsive move to set sail was the result of a combination of factors: Swedish king Gustavus Adolphus, who was leading the army on the continent on the date of its maiden voyage, was impatient to see it join the Baltic fleet in the Thirty Years War; at the same time, the kings subordinates lacked the political courage to discuss the ships structural problems frankly or to have the maiden voyage postponed.During the 1961 recovery, thousands of artifacts and the remains of at least 15 people were found in and around the hull of the Vasa by marine archaeologists. Among the many items found were clothing, weapons, cannons, tools, coins, cutlery, food, drink and six of the ten sails. No expense was spared in decorating and equipping the Vasa, which was also one of the largest and most heavily armed warships of its time.