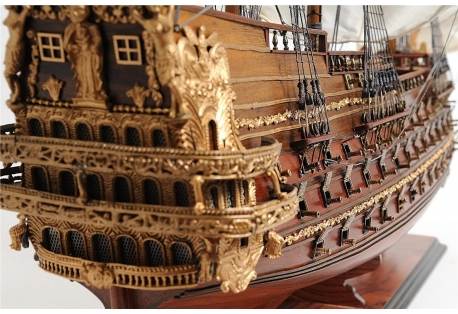 Beautiful boat, came well packed in the wooden create, ship model has a lot of details, will purchase from this store again. Thank you

This is a high quality FULLY ASSEMBLED "Holy Ghost”, the 80-gun ship of the line of the French Navy, lead ship of her class. The Saint Esprit was offered by the Order of the Holy Spirit, and named in its honour. This is an “Exclusive Edition” where the model has a unique serial number etched into the hull, which allows us to identify production date, material used and all other production information of a model.

This beautiful Saint Esprit model features plank on frame, three decks, and three rows of ferocious cannons on each side of the hull. A unique bowsprit design that consists of metal statue and side railings coated in gold color. The front bowsprit and three large masts are connected securely using advanced rigging and lines painstakingly knotted and fastened by hand. Each yard has an attached hand-stitched unfurled sails made of fine linen. Metal anchors and a wooden rudder are visible on the front and rear of the ship. On the deck, there are metal stationed cannons, authentic hand-built lifeboats with ribs and planks, wooden windlass, wooden cabin, wooden bell tower, metal steering wheel, and many other spectacular ornaments. There is also an exquisite detailed admiral’s quarter on the stern with beautiful handcrafted brass statues and ornaments.

The Saint-Esprit ("Holy Ghost") was a 80-gun ship of the line of the French Navy, lead ship of her class. She was funded by a don des vaisseaux donation from the Order of the Holy Spirit, and named in its honour. She took part in the Battle of Ushant under La Motte-Picquet, and to the Armada of 1779. She was renamed Scipion in April 1794, and took part in the Bataille du 13 prairial an 2 under Huguet, where she was totally dismasted. She was wrecked on 30 January 1795, during the Croisière du Grand Hiver. Most of her crew was rescued by Trente-et-un Mai.