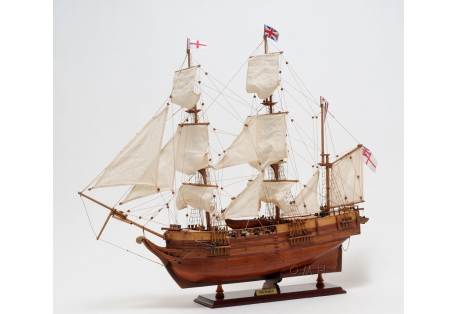 The model is 100% individually hand built from scratch using “plank on frame” construction method, same method as were used when building real ships.

All made of exotic wood such as mahogany, western red cedar and purple heart trim.

HMS Beagle was a Cherokee-class 10-gun brig-sloop of the Royal Navy. She was launched on 11 May 1820 from the Woolwich Dockyard on the River Thames, at a cost of £7,803. In July of that year she took part in a fleet review celebrating the coronation of King George IV of the United Kingdom in which she was the first ship to sail under the new London Bridge. After that there was no immediate need for Beagle so she “lay in ordinary" moored afloat but without masts or rigging. She was then adapted as a survey barque and took part in three expeditions. On the second survey voyage the young naturalist Charles Darwin was on board, and his work would eventually make the Beagle one of the most famous ships in history.