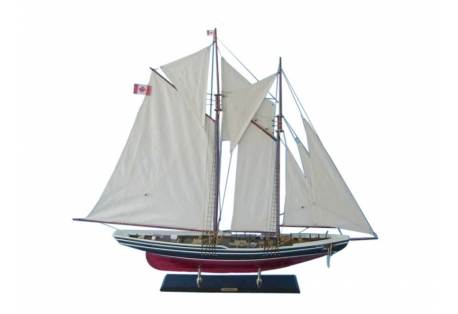 This Limited Edition scale replica’s unmatched craftsmanship and attention to detail make this model of the famous Canadian schooner Captain and envy of the Bluenose 2 fleet. This awe-inspiring model of the Bluenose 2 is bedecked with museum-quality features and finely-crafted details, commanding any room with the same winning spirit and hard-working attitude that won her decades of awards as both a racing and fishing vessel.

Generations of Atlantic Canadians have grown up with stories of the Original Bluenose Nova Scotia, her Captain Angus Walters and Bluenose II.

The vessel became the world's most famous Nova Scotian fishing schooner racing victorious - and undefeated - into history and legends.

A glorious reign as Queen of the North Atlantic began with her launching from Lunenburg's Smith and Rhuland boatyard on March 26, 1921. It tragically ended a quarter century later.

In 1963, Bluenose II was launched from the same shipyard, built by many of the men who had worked on the Original Bluenose.