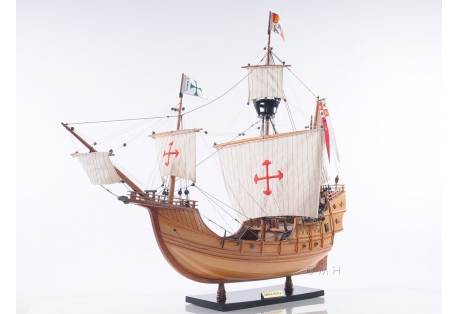 Santa María, original name Marigalante, Christopher Columbus’ flagship on his first voyage to America. Today you can own this unique model fully assembled in your own home or office!

The Santa Maria is made out of wood with no plastic pieces. It features plank on frame construction. The front bowsprit and three masts are connected securely using advanced rigging and lines painstakingly knotted and fastened by hand.

Each yard has an attached hand-stitched unfurled sails made of fine linen. Metal ornaments, cannon, and wooden lifeboats are visible on this model. It comes with a stand and ready for display.

About 117 feet (36 metres) long, the “Santa María” had a deck, three masts, and forecastle and sterncastle and was armed with bombards that fired granite balls. She performed well in the voyage but ran aground off Haiti on Dec. 25, 1492, and was lost. Her sister ships, the “Niña” and “Pinta,” less than half her size, returned safely to Spain despite near catastrophe in storms.