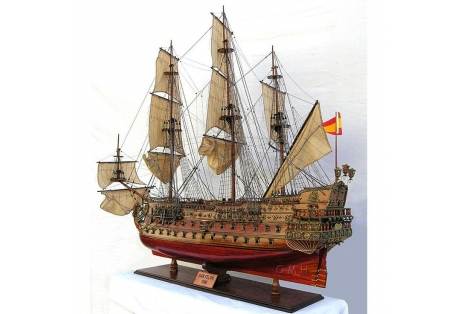 Ornaments on her body made her more beautiful than any other ships at her time”.
Thus, to recapture the beauty of this ship into the model, the most exotic wood that are available were used and the highest quality brass fittings. Examples of wood use include rosewood, ebony and mahogany. These materials are transformed into art pieces by the skillful hand of the master craftsmen.
If you look closer, you can see an evenly smooth surface of wood on the hull. It was done more beautifully then most pieces of fine furniture. From the bow to the stern, you can see hundreds of shiny brass fittings and cannons. Wood pieces of different shades and colors are carefully selected and used to create an impressive look. The stern is the most decorated area with hundreds of small brass ornaments, brass railing, figurines and lanterns.
You will more than likely be falling in love with the art work on the different decks of this model. All decks are done by putting together many rectangular small wooden pieces. There are round shape stairs connected the main deck and the forecastle deck. The main deck is also equipped with a couple of life boats, which even come with their own paddles. And then there are the skylight, ship bell, and ship wheel…etc. The model comes with its original flag and rest on a steady wooden base with attached metal name plate. 100% assemble, ready for display.

The San Felipe was one of the most beautiful Spanish ships in the 1600s. Launched in 1690, it had 96 cannons and was the the lead ship of the feared Spanish Armada. It was powerful enough to go up against the most formidable ships in the French and British navies. In 1705, the San Felipe and 11 other Spanish ships waged a a furious and heroic battle against 35 British ships. After 24 hours of fighting, the San Felipe was captured, but was so badly damaged that it could not be salvaged as a prize. It sank with several tons of gold.

This model is available in various sizes