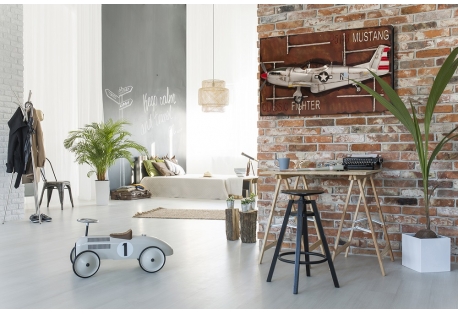 Upon closer look, you will notice the plane is exposed out from the frame along with other details such as propeller, wings, cockpit, landing wheels, and the word mustang fighter imprinted on the frame. It is completely handmade from tin and painted to give it an authentic look. It’ll make a good wall decoration piece for your home or office. A must-have for the collector and enthusiast!

This 1943 Grey Mustang P-51 was an American long-range, single-seat fighter and fighter-bomber used during World War II, the Korean War and other conflicts. From late 1943, P-51Bs and P-51Cs were used by the USAAF's Eighth Air Force to escort bombers in raids over Germany, roles in which the Mustang helped ensure Allied air superiority in 1944. The realism of this 3D 1943 Mustang P-51 painting is incredible.