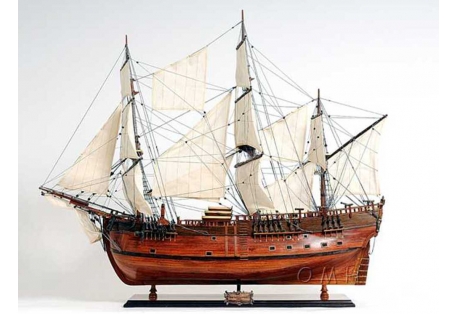 This handcrafted, expert level, highly detailed, museum quality, HMS Endeavour tall ship model is Brand New, fully assembled and ready for display (not a kit).This tall ship model was specially designed & built by the plank on frame method (joining multiple small pieces of exotic tropical wood together on the hull). The tall ship model is built exactly to scale as the original HMS Endeavour was with many details. The task required skillful craftsmen hundreds of hours to accomplish.Aboard the HMS Endeavour (also known as the HM Bark Endeavour) in 1768 Lieutenant James Cook, Royal Navy set sail on a voyage of exploration and scientific investigation and through his journeys, Cook is considered to be one of the greatest explorers.

In 1768 Lieutenant James Cook, Royal Navy, set sail on HMS Endeavour on a voyage of exploration and scientific investigation and through his journeys, Cook is considered to be one of the greatest explorers.

In 1770 Cook reached New Zealand where he circumnavigated and completely charted the north and south islands before continuing west. In April, he sighted the east coast of Australia and sailed north along the coast before anchoring in what he named Botany Bay. He then continued north to Cape York and on to Jakarta andIndonesia. During the four months voyage along the coast Cook charted the coastline from Victoria to Queenslandand proclaimed the eastern part of the continent for Great Britain.

Cook was the first person to accurately chart a substantial part of the coastline of Australia and to fix the continent in relation to known waters. His explorations of Australia were followed up within a few years by a British expedition to settle the "new" continent. Accordingly, Cook is considered a major figure in Australia's modern history. Numerous places in Australia, particularly on the east Australian coast and New Zealand, have been named after him or his vessel, and many of the names he gave to parts of the Australian east coast in 1770 are still used (e.g. Cape Tribulation, Botany Bay, the Whitsunday’s).

Cook's 1768-1771 voyages in HMS Endeavour is also considered to be of general historical importance because of its great contributions to the world's knowledge of seamanship and navigation, as well as geography. On his voyages Cook became the first captain to calculate his longitudinal position with accuracy, using a complex mathematical formula developed in the 1760's. He was also the first to substantially reduce scurvy among his crew, a serious, sometimes fatal result of dietary deficiency on long voyages