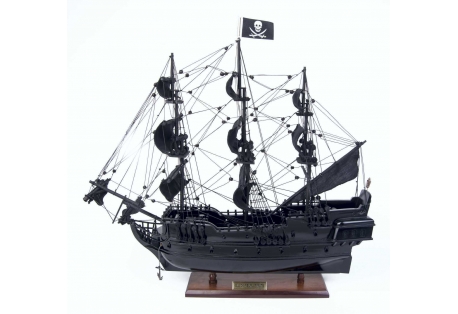 The Black Pearl; originally Wicked Wench is Captain Jack Sparrow’s pirate ship. In the three movies (Curse of the Black Pearl, Dead Mans Chest, and At Worlds End) she either overtakes or flees all other ships, including the Interceptor (regarded as the fastest ship in the Caribbean) and the Flying Dutchman (which is actually faster against the wind). Her speed is derived from a large amount of sails she carries. She is noted in At Worlds End as being "The only ship as what (which) can outrun the Flying Dutchman.”

Our Black Pearl model features coated black paint, plank on frame, cannons, bowsprit, masts, rigging, and lines painstakingly knotted and fastened by hand. On the deck, there are metal stationed cannons, wooden cabin, wooden barrels, and many other spectacular ornaments.This model comes standard with a solid wood base and brass nameplate. It’ll make a perfect gift for home or office decorator, boat enthusiast or passionate collector.