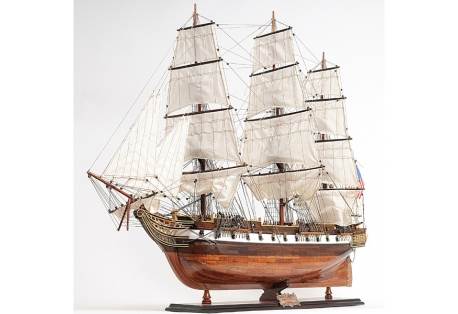 This Sloop Of War tall ship model was specially designed & built by the plank on bulkhead method (joining multiple small pieces of wood like Rosewood, Mahogany, Teak and other exotic tropical wood together on the hull). The tall ship model is built exactly to scale as the original USS Constellation was with many details. The task required skillful craftsmen hundreds of hours to accomplish.

This huge model measures 56" long from bow to stern. It's a historical & famous ship model that will be a conversation piece for any room or office.

On 27 March 1794, the United States Congress passed the Naval Act of 1794, which provided for building the US Navy its first new ships: the frigates Chesapeake, Congress, Constellation, Constitution, President, and United States. Constellation was the first to be commissioned.

Constellation was built at Harris Creek Shipyard in Baltimore's Fells Point and launched on 7 September 1797, just as the United States entered the Quasi-War with France.

On 9 February 1799, under the command of Captain Thomas Truxtun, Constellation fought and captured the frigate L'Insurgente of 36 guns, the fastest ship in the French Navy — the first major victory by an American-designed and -built warship.

Other victories followed. In February 1800 Constellation fought a night encounter with the frigate La Vengeance of 54 guns. Constellation was victorious after a five-hour battle. The French commander just managed to save his ship from capture and -upon returning to port- was so humiliated he later boasted that the American ship he had fought was a much larger and more powerful ship of the line. Since the encounter, the Constellations' incredible speed and power inspired the French to nickname her the "Yankee Racehorse."

Constellation served in the Barbary Wars against Tripoli and in the War of 1812 against Great Britain. In 1840, Constellation completed a voyage around the world, which included becoming the first U.S. warship to enter the inland waters of China.

In 1853 Constellation was struck and broken up at the Gosport Navy Yard in Norfolk, Virginia.