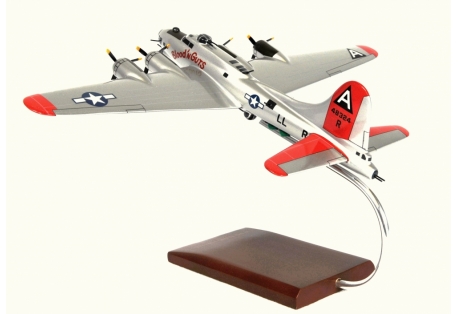 This desktop model airplane hase beed created by our master craftsmen who shape these highest quality models from fine mahogany or state-of-the-art composites with remarkable precision and attention to detail. Fine sanding by talented artists between each primer and top coat provides a brilliant, ultra smooth surface ready for authentic nose art, intricate decals original stripes and special markings. A final coat of clear polyurethane seals the finish for lasting protection to preserve that just out of the box look. Your limited edition heirloom can be passed confidently from your generation to the next. The Boeing B-17 Flying Fortress is a four-engine heavy bomber aircraft developed in the 1930s. The B-17 was primarily employed by the United States Army Air Forces (USAAF) in the daylight precision strategic bombing campaign of World War II against German industrial and military targets. From its pre-war inception, it was touted as a strategic weapon; it was a potent, high-flying, long-range bomber that was able to defend itself, and to return home despite extensive battle damage.This handcrafted model is painted in the same paint scheme as the original and is painstakingly built from Philippine mahogany by our skilled craftsmen. Perfect as a gift for any aviation enthusiast and history buff!