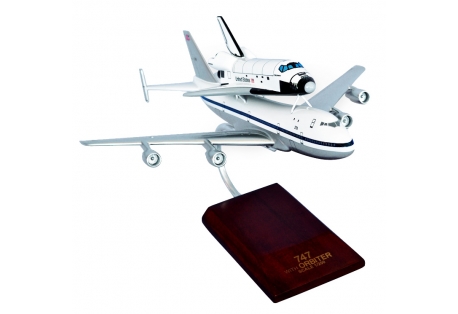 The Shuttle Carrier Aircraft (SCA) are two extensively modified Boeing 747 airliners that NASA formerly used to transport Space Shuttle orbiters. One is a 747-100 model, while the other is a short range 747-100SR. The SCAs were used to ferry Space Shuttles from landing sites back to the Shuttle Landing Facility at the Kennedy Space Center, and to and from other locations too distant for the orbiters to be delivered by ground transport. This specific model is the Boeing 747-100, registered as N905NA. It was originally manufactured for American Airlines, and then extensively modified by Boeing in 1976. Its cabin was stripped, mounting struts added, and the fuselage strengthened; vertical stabilizers were added to the tail to aid stability when the Orbiter was being carried. The avionics and engines were also upgraded, and an escape tunnel system was added.This handcrafted model is painted in the same paint scheme as the original and is painstakingly built from Philippine mahogany by our skilled craftsmen. Perfect as a gift for any aviation enthusiast and history buff!