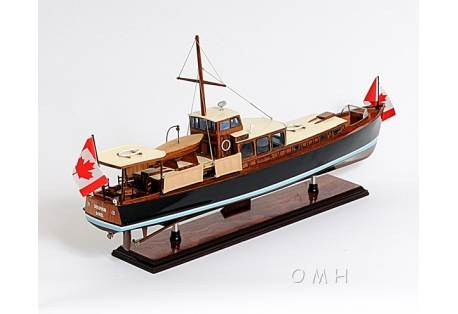 The Yacht Dolphin was built by Consolidated Commuters on Long Island. There are only 4 left that exists today. The Yacht Dolphin belongs to the same family when she was built in 1929 and is registered in Sorel, Canada. The DOLPHIN is shipped as a FULLY ASSEMBLED MODEL ready to be displayed.

There are a lot of details that you can see in this model. The chairs, tables, ladders, and life boat are all made out of wood. Every piece is to replicate the original parts of the ship from the buoys to the Canadian flag.

This model rests on a solid wood base with brass nameplate. It’ll make a perfect gift for home or office decorator, boat enthusiast, or passionate collector.

The Yacht Dolphin was built by Consolidated Commuters on Long Island. She is perhaps the finest looking boat on the NY Canals, a 66 mahogany beauty. There are only 4 left that exist today. The Yacht Dolphin belongs to the same family when she was built in 1929 and was registered in Sorel, Canada. Originally there were some 300 Consolidated Commuters. Most of them were built for wealthy businessmen to commute from their homes on Long Island to Manhattan. When two of them would meet, often a race would ensue and the New York Yacht Club would record the results. They often carried a crew of 5-6 including a cook, a barber and a maid as well as the Captain and deck crew. Yacht Dolphin was originally equipped with Speedway gasoline engines, but those are long gone. She is now powered by twin Cummins B200 turbo-diesels.