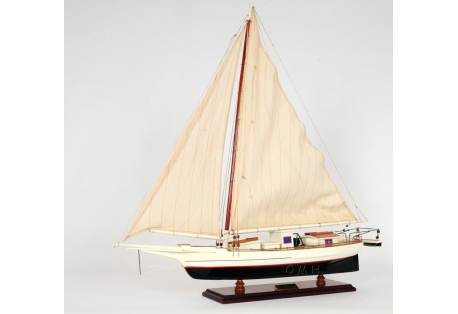 This model 100% hand built individually using plank-on-frame construction method and are similar to the building of actual ships.

Skipjack, a traditional fishing boat used on Chesapeake Bay for oyster dredging. It is a sailboat which succeeded the Bugeye as the chief oyster boat on the bay, and remains in service due to laws restricting the use of powerboats in the Maryland state oyster fishery.

The Skipjack apparently first appeared on the Lower Eastern Shore of Maryland in the late 1800s. Its development was precipitated by the decline in oyster harvests, and the need for an inexpensive shallow draft vessel.

The design hasnt changed in over 150 years, and the average Skipjack has now lasted well over three-quarters of a century, a tribute to their excellent construction. Skipjacks carry a sail design known as the "Leg-O-Mutton" Sloop Rig consisting of a main sail and a jib. The standard design formula calls for a mast height which is the same the as length of the vessel on deck, plus the width of the beam.

According to legend, no Skipjack was ever built from a formal set of plans, but rather by "rack of the eye". They were developed from the lines of the Chesapeake Bay Log Canoe, the Brogan, and the famous Clipper Ships. They are unique to the Eastern Shore of Maryland and Virginia, and the few remaining skipjacks still dredge oysters under sail during the fall and winter oyster season on the Chesapeake Bay