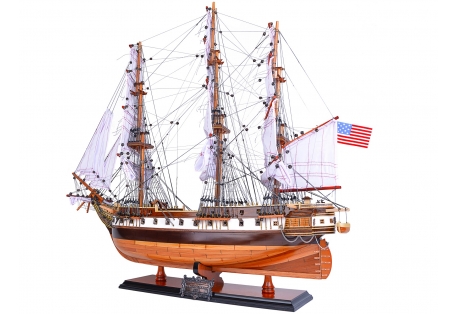 This is museum-quality, a FULLY ASSEMBLED replica of the U.S.S. Constellation, last sail-only warship designed and built by the U.S. Navy. This is an “Exclusive Edition” where the model has a unique serial number etched into the hull, which allows us to identify production date, the material used and all other production information of a model.Master craftsmen using historical photographs, drawings or original plans meticulously handcraft these highly detailed wood models from scratch. They are built to scale with high-grade wood such as western red cedar, rosewood, and mahogany. They are 100% hand built individually using plank-on-frame construction method and are similar to the building of actual ships. Each model requires hundreds of hours to finish and must go through a demanding quality control process before leaving the workshop.This amazing model of the USS Constellation features plank on frame, two decks, and one stretched a ferocious row of metal cannons on each side of the ship. The front bowsprit and three large masts are connected securely using advanced rigging and lines painstakingly knotted and fastened by hand. Each yard has an attached hand-stitched rolled-up sail made of fine linen. The glorious American flag is attached to the mizzen yard. Metal anchors and a wooden rudder are visible on the front and rear of the ship. On the deck, there are stationed metal cannons, metal steering wheels, wood ladders and crane, captain’s dining and sleeping cabin, and many other handcrafted ornaments. There is also an exquisite detailed admiral’s quarter on the stern with beautiful decorative brass ornaments and an authentic hand-built lifeboat with ribs and planks.This model comes standard with a solid wood base and brass nameplate. It’ll make a perfect gift for home or office decorator, boat enthusiast or passionate collector.

On 27 March 1794, the United States Congress passed the Naval Act of 1794, which provided for building the US Navy its first new ships: the frigates Chesapeake, Congress, Constellation, Constitution, President, and United States.

Constellation was the first to be commissioned. Constellation was built at Harris Creek Shipyard in Baltimore’s Fells Point and launched on 7 September 1797, just as the United States entered the Quasi-War with France. On 9 February 1799, under the command of Captain Thomas Truxtun, Constellation fought and captured the frigate L’Insurgente of 36 guns, the fastest ship in the French Navy — the first major victory by an American-designed and built warship. In February 1800 Constellation fought a night encounter with the frigate La Vengeance of 54 guns. Constellation was victorious after a five-hour battle. The French commander just managed to save his ship from capture and -upon returning to port- was so humiliated he later boasted that the American ship he had fought was a much larger and more powerful ship of the line. Since the encounter, Constellations incredible speed and power inspired the French to nickname her the "Yankee Racehorse”.