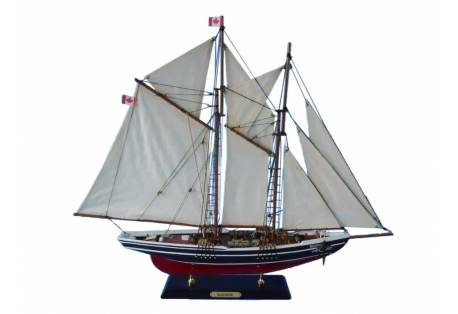 
This newly designed Limited Edition museum-quality scale replica Bluenose yacht is offered exclusively by Handcrafted Model Ships, and includes a numbered Certificate of Authenticity signed by HMS Founder and Master Builder Richard Norris, as only 250 will ever be made. Accurate in almost every detail to the original Bluenose schooner.

Compare the quality, craftsmanships and details of the Limited Edition Bluenose model to others and notice:

-   Higher-quality sails with additional rigging:  The sails are slightly starched to hold their shape and a higher quality and higher thread-count material is used, similar to that of the actual Bluenose yacht at the time it sailed.  We offer three unique sail materials that are matched to the different eras of model yachts we offer.  Also, additional rigging lines have been added to be more true to the actual Bluenose yacht