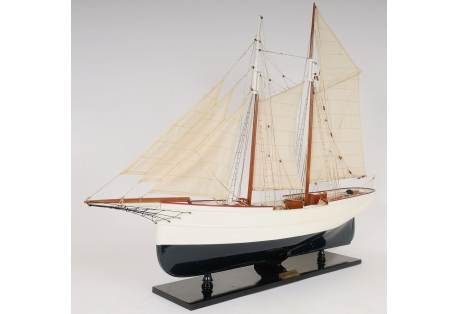 This high quality, highly detailed, expert level, Wander Bird ship model is Brand New, fully assembled and ready for display (this is not a kit).

This Wander Bird pilot schooner model was specially designed & built by the plank on bulkhead method (joining multiple small pieces of Mahogany wood together on the hull). The sailboat model is built exactly to scale as the original Wander Bird was with many details. The task required skillful craftsmen hundreds of hours to accomplish.

The hand sanded mahogany hull has white topsides and very dark blue bottom paint. Rigging on the Wander Bird is very detailed with coiled lines, rat lines and dock lines stored on deck. The schooner is mounted on a solid wood base with a metal nameplate.

Built as the pilot schooner "Elbe 5" after a design by Gustav Junge at the H.C. Stlcken & Sohn shipyard in Hamburg, Germany in 1883, it retired from pilot service in 1924 and purchased by author Warwick Tompkins in 1928. In 1929 it was commissioned as a cruising yacht and sail training vessel, and was renamed the "Wander Bird". In 1936 Tompkins sailed her around Cape Horn to San Francisco Bay. After a voyage to Tahiti, Tompkins laid the schooner up in Sausalito, California in 1941 where she became a houseboat.

After some unsuccessful trials to sell her back to Germany she departed Sausalito for Seattle in October 1998, the new owners Jim Flury and David Cook intended to offer charter cruises in Mexican waters but instead chartered her to a non-profit group in Seattle to serve as a sail training ship and goodwill ambassador for the city, this program never got started but the schooner remained in Seattle.