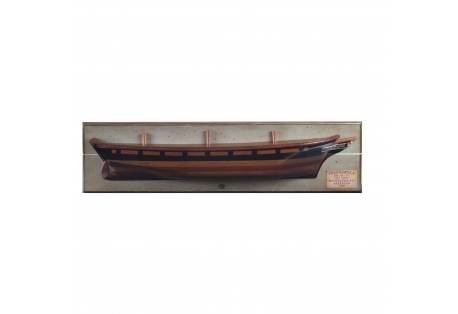 Amid the 19th Century, Shipwrights created exact scale model Half Hulls, this was a construction plan for a ships Hull

and Sheer (curvature). These were mounted and displayed in Admiralty and shipping offices.

The mid 19th Century Clippers were fast ships with 3 masts and a square rig.

The era of the Clipper ship began in 1843 with the growing demand for the transport of tea from China, and continued through gold discoveries in California and Australia in the 1840's to the 1850's, as well as through the opening of the Suez Canal in 1869.

The Figurehead - Often a mixture of Historical or mythological significance, a figurehead inspired all those who lived and worked in the vessel. Sailor's lore portrays the shipas a living being, with the figure at the bow as her soul.