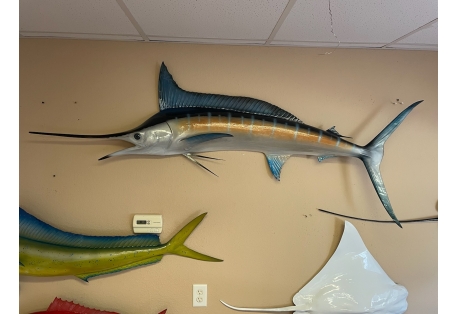 This fish looks so real, great job, very happy with the purchase.

This perfect tournament sized blue marlin fish mount is part of our half sided series. A half sided mount is produced by casting the front part of our two sided wall mount molds. When displayed the circumference of the half mount is either touching the wall or very close to the wall.

Blue marlin are without a doubt one of the most prestigious gamefish targeted across the world. Sportfishing crews from sea to sea chase after this majestic fish hoping to raise her into the spread and drum up a bite. Blue marlins can grow up to 1200 lbs and are referred to as Granders once they reach the 1000 lb range. Colors on blue marlin are normally a variation of dark and electric blues and teals on their shoulders and backs that are separated by a hard dark like running horizontally down their body which is normally a brownish, silvery color. Quite often silver to blue vertical lines also run down their side. Like other fish, blue marlin can have many different variations of coloring however our standard paint job is as mentioned above. The final step of the finishing process is to spray a UV protecting clear coat to give it superior protection indoors or outside. We do not custom paint our half sided series replicas.