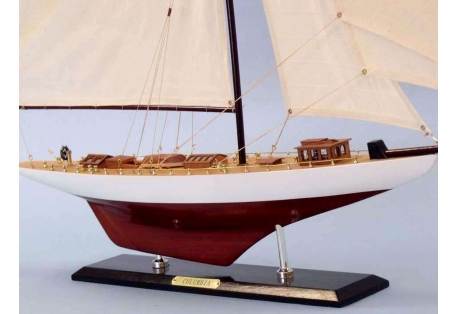 With the graceful speed of the waves, unbound freedom of the wind and winning spirit of her famous namesake, these LimitedEdition model sail boats of the Columbia racing yacht will brighten any room with her presence. Sailing atop a shelf, mantle or table this elegant yacht model is the perfect highlight for an office or meeting room, bedroom or beach house.

Design
Columbia, a fin keel sloop, was designed and built in 1898-9 by Nathanael Herreshoff and the Herreshoff Manufacturing Company for owners J. Pierpont Morgan and Edwin D. Morgan of the New York Yacht Club. It was the third winning defender built by Herreshoff.
Columbia had a nickel steel frame, a tobin bronze hull, and a steel mast (later replaced with one of Oregon pine.)
Career
Columbia, demasted, 1899. Photograph by John S. Johnston.
Columbia was launched on June 10, 1899. It easily won the elimination trials against the rebuilt former defender, Defender. Skippered by Charlie Barr, it won all three races against the British defender, Shamrock in the 1899 America's Cup. Notably, Hope Goddard Iselin was the only female on the crew, serving as a afterguard.
Columbia was selected again in 1901 to defend the Cup, and again under the command of Charlie Barr, won all three races against Shamrock II.
In 1903 Columbia was refitted with the hope of being selected for a third time, but it was badly beaten in the selection trials by the yacht Reliance.
Columbia was cut up for scrap in 1913 at City Island.
Specifications
* Overall length: 40.15 m
* Length at water line: 27.25 m
* Beam (width): 7.39 m
* Draft: 5.97 m
* Displacement: 148.7 tonnes
* Sail area: 1189 m2