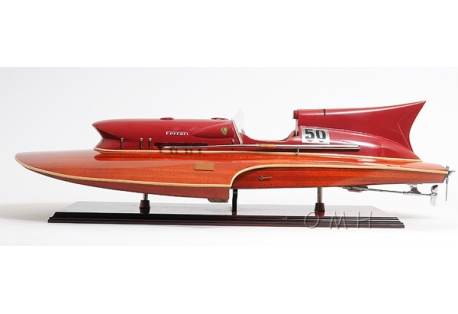 100% hand built individually using plank-on-frame construction method and are similar to the building of actual ships.

This is an amazing model of the Ferrari Hydroplane handcrafted from cedar and mahogany.

There are hundreds of tiny construction nails vividly showed on the hull. The dashboard has two tones wood panel installed with realistic look stainless steel gauges.

Each model requires hundreds of hours to finish and must go through a demanding quality control process before leaving the workshop.

Model was  built to scale with high-grade wood such as: western red cedar, rosewood, and mahogany.

This model is secured on a large solid wood base. It’ll make a perfect gift for home or office decorator, boat enthusiast, or passionate collector.

An enthusiast for motor boat racing, Achilles Castoldi decided to focus on setting top speed records in 1953. He commissioned a 800kg class three-pont hydroplane hull to be built by Cantieri Timossi.

The hull was dubbed Arno XI. As for the engine, he turned o the new up and corners of the auto racing scene - Scuderia Ferrari. On the morning of October 15, 1953, Achille Castoldi succeeded in smashing the 800 kg class speed record with an average "flying kilometer" two way speed of 150.49 miles per hour.

He followed up the performance on the follow day by setting another record of "24 nautical miles" event with an average speed of 102.34 miles per hour. Arno XI was restored in the early 1990s and was placed for auction at the Coys Festival Silverstone in 1997 that was not sold. However, Arno XI was eventually sold at the 2012 RM Auction in Monaco for 1.12 million dollars.