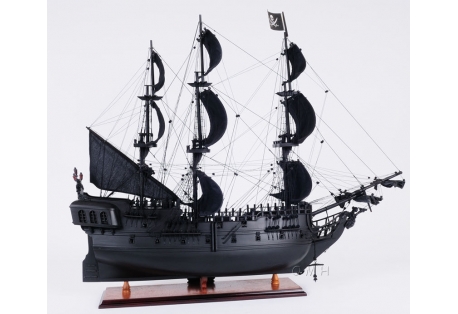 This Black Pearl Caribbean Pirate Ship model was specially designed & built by the plank on bulkhead method (joining multiple small pieces of wood together on the hull). The boat model is built exactly to scale as the original replica Black Pearl used in the movie "Pirates of the Caribbean" was with lots of detail. The task required skillful craftsmen hundreds of hours to accomplish.

The entire wooden hull is painted dark black just like the replica Black Pearl. The cloth sails are also black and have a new under full sail blew shape. Rigging on the Black Pearl is very detailed with coiled lines on deck, rat linesand lots of wooden blocks (there are no plastic parts). There is a Jolly Roger flag (originally the flag of pirate Calico Jack) flying from the foremast. The pirate ship is mounted on a solid wood base with a metal nameplate.

This is an Exclusive Edition Model Ship, where each model is uniquely identified by a serial number, which is laser cut to the hull of each model. In this edition, we are able to identify the production date of a model, the material that we used on the model, the craftsmen who worked on each area of the model, the individual who inspected the model and also the professional packaging staff, who finally packed the model into shipping box. We put quality number 1 priority, thus all steps are thoroughly supervised from the beginning to the end of making each model.

In the first movie, the Black Pearl was a steel barge with wooden structures built on top to resemble a real ship. In addition, a soundstage set was used to achieve better control over fog machines. For the second and third movies, a floating sailing ship was actually built in the shipyards at Bayou La Batre in Alabama on the hull of ship HMS Sunset to serve as the set, though it is not an authentic tall ship. Another version, mounted on a gimbal, was built for filming the Maelstrom battle. In 2010, the Sunset, which played the Black Pearl in most of the films, was reconstructed to portray the Queen Anne's