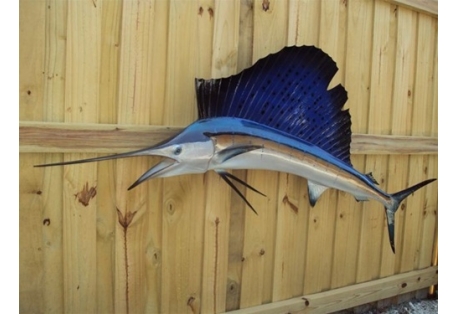 This 61" Atlantic Sailfish full mount, which we call a two sided wall mount, is extremely realistic with a textured bill and skin texture that was captured during the molding process. Everything that is viewable when up on all the wall is finished. Atlantic Sailfish are one of the Atlantic Ocean's fastest gamefish and are sought after for the sport of catch and releasing. Many tournaments are organized with payouts going to the teams that can catch and release the most sailfish. Our Atlantic Sailfish full mounts are anatomically correct fish mounts that are intended to be displayed on the wall. The backside of the fish mount that is touching the wall or not viewable is actually painted black. These two sided wall mounts are not intended to be hung from the ceiling.