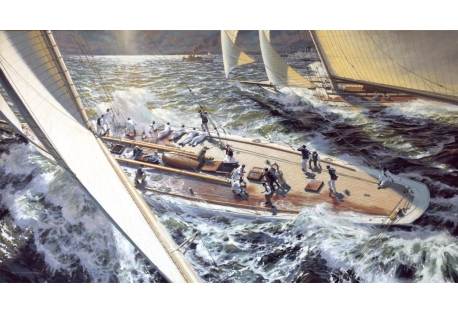 Exceptional museum-quality limited edition giclee print on canvas from the original painting by renowned American marine artist Russ Kramer, signed and numbered and hand-enhanced with textured varnish by the artist. Having successfully defended the America's Cup in 1899, COLUMBIA was selected to compete again in 1901 against the brand new SHAMROCK II. The third and decisive race took place on October 4, with the two boats crossing the line in a virtual dead heat, the defender besting the challenger only on corrected time. Interestingly, along with Charlie Barr at the helm, and Mr. and Mrs. Iselin on board, so too were the the Iselin's two teenage nieces, Nora and Fannie, who had a first-hand view of the action.

Today, Russ Kramer is widely regarded to be among the nation’s leading marine artists. His large-scale studio paintings create ‘first-hand’ experiences for the viewer, putting you right on board during some of history’s greatest yacht races or turn-of-the-century luxury vessels. A sense of the dramatic moment, combined with meticulous research and attention to detail, have found considerable appeal and sell quickly into private and corporate collections. His works are unique and immediately recognizable, combining narrative, historical, figurative and maritime disciplines. Russ served as President of the 500-member American Society of Marine Artists from 2011 to 2016. Russ lives and works in Mystic, CT.