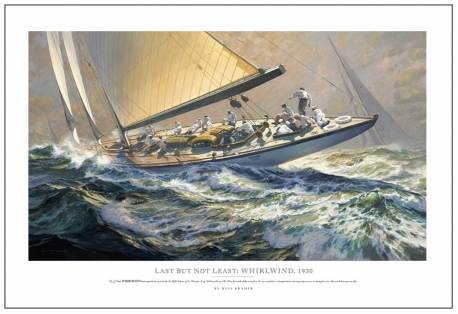 Challenger to defend the America’s Cup, 1930

Exceptional quality limited edition giclee print on paper from the original painting by renowned American marine artist Russ Kramer, signed and numbered by the artist. Helmed by owner Landon Thorne, the J-Boat WHIRLWIND beats upwind during the 1930 trials to choose a defender of the America's Cup. Striking with an Art Deco flair and wildly innovative, hand-made down to the smallest detail, she was nonetheless a disapointment -- winning only one race in twenty five tries. She was broken up a mere five years later.

Today, Russ Kramer is widely regarded to be among the nation’s leading marine artists. His large-scale studio paintings create ‘first-hand’ experiences for the viewer, putting you right on board during some of history’s greatest yacht races or turn-of-the-century luxury vessels. A sense of the dramatic moment, combined with meticulous research