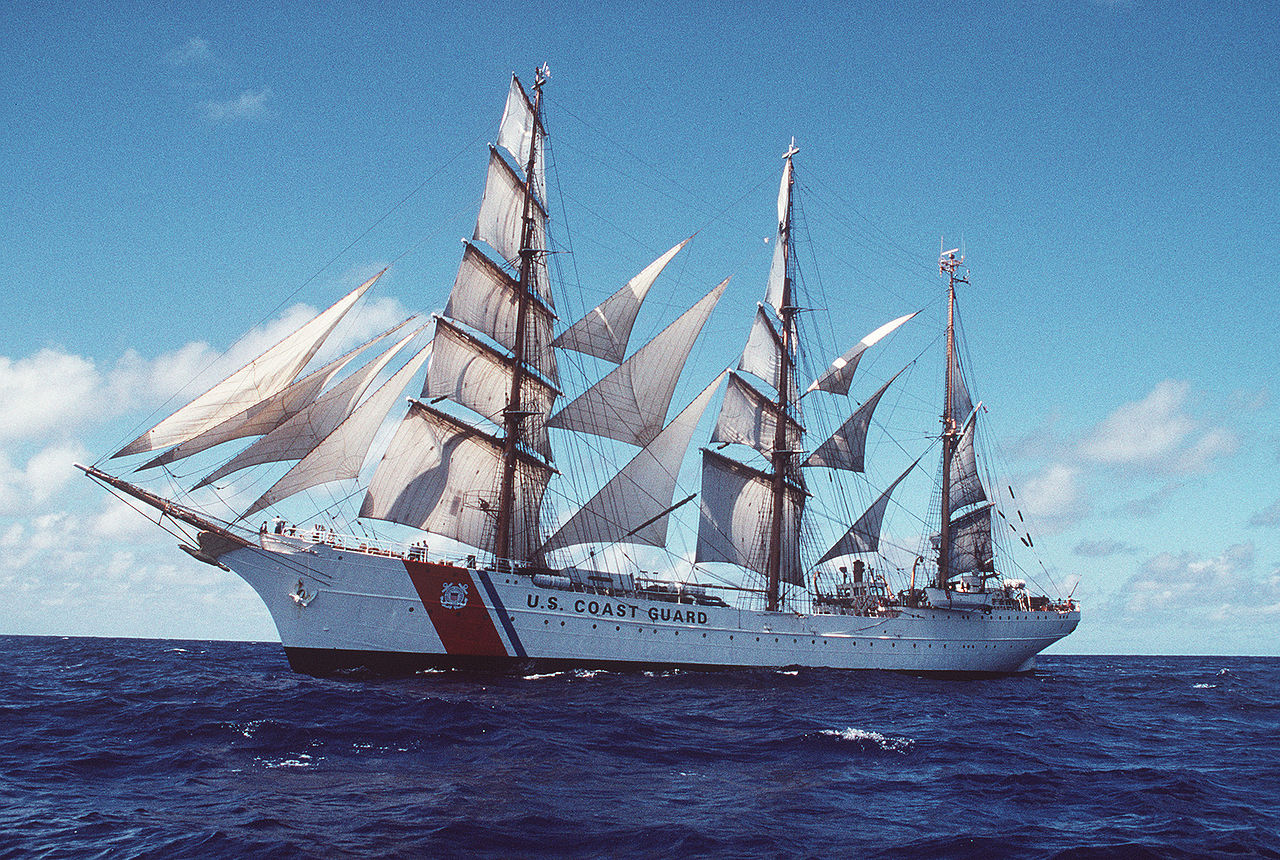 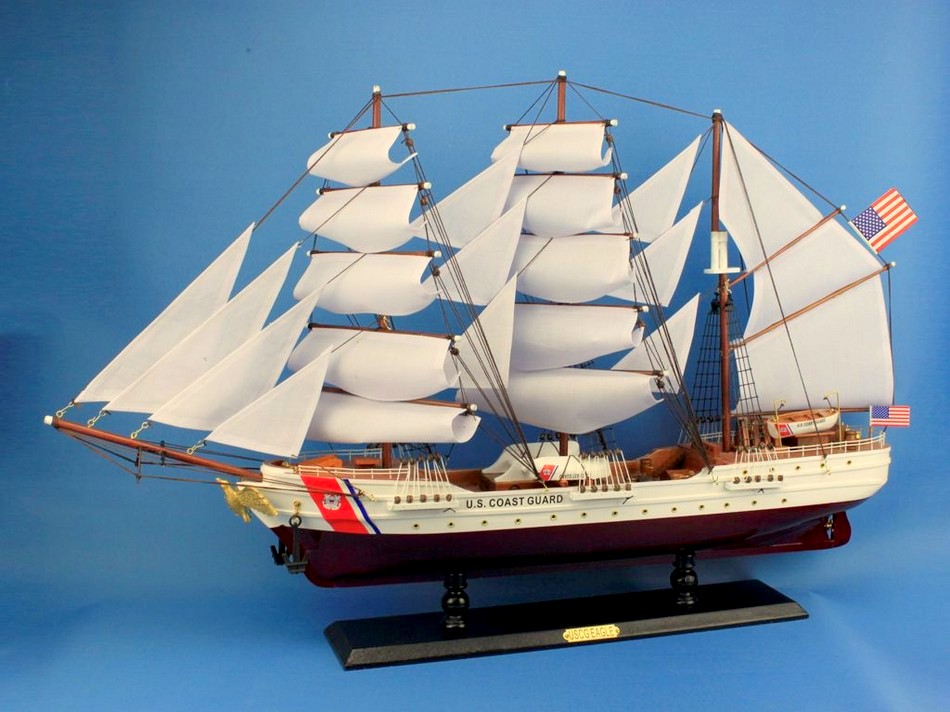 The Eagle, by a Different Name, is Born in Germany:

As one of three sailing training ships, built in pre-World War II Germany, the USCG Eagle began her legendary career at sea as the SSS Horst Wessel. Designed by John Stanley as a Gorch Fock class cutter, a three-masted sailing barque, the ship or “Schiff” had its keel laid on February 15, 1936. Known then as ship number 508, she was launched on June 13 of that year, completed on September 16, and was commissioned the following day. Present at the launch and christening were Adolf Hitler and the Nazi politician Rudolph Hess, spectators for the ship named after Nazi party member Horst Wessel who wrote the music used in the German national anthem.
Constructed by the historic Blohm and Voss Shipyards, which had been building ships since 1877, the SSS Horst Wessel emerged at 295 feet long, weighing 1824 tons. Powered by engine and sail she operated with three masts, the main and fore masts reaching 148 feet and the mizzenmast reaching 132 feet, and a 1,000 horsepower diesel engine. With a range of approximately 5,500 nautical miles and a top speed of 17 knots, she was a spry cutter designed for speed and agility. Two full length decks and one lower platform deck were all crafted from solid steel, with a hull that was four-tenths of inch-thick. For the quarterdeck and forecastle, steel was overlaid with rich teak, three inches thick, for both strength and classic aesthetics.

Commanded by Captain August Theile, the Horst Wessel set out on numerous training exercises throughout the waters of coastal Europe and the Caribbean. As the flagship of the Kliegsmarine sail training fleet, countless sailors learned war-time tactics while aboard her decks before she was decommissioned in 1939. Between 1939 and 1942 the Horst Wessel continued to serve as a training ship while she was docked at port, allowing German sailors a chance to study and learn aboard an actual vessel prior to being exposed to combat at sea. Recommissioned in 1942, she was outfitted with two 20mm anti-aircraft guns on the bridge, another two on the foredeck, and two quad guns along her midsection, making for a fearsome warship both to naval and aerial enemies. Though she was not an integral part of the offensive German strategy at sea, she still managed to shoot down three Soviet fighter planes in her time.
Following the end of World War II, as part of the reparations Germany repaid to various countries, the SSS Horst Wessel was adopted by the United States. Commissioned into service for the United States Coast Guard on May 15, 1946, she was rechristened the Eagle. Sailing from Bremerhaven, Germany the following month, with a crew of American and German sailors, she venture across the Atlantic to her new home in New London, Connecticut. As the sixth American vessel to take the name Eagle, the first dating to 1792, she found her new homeport on the Thames River alongside the United States Coast Guard Academy. Continuing her original purpose, the USCG Eagle became a training ship for countless Coast Guard students and remains America’s only active square-rigger vessel.

Now a legend, the USCG Eagle continues to train Coast Guard students, giving officer candidates a unique experience and the opportunity to practice the skills they have learned in the classroom. Venturing out on numerous training courses throughout the year, from a week at sea to two months, upper class students are afforded the chance to practice leadership skills while underclass men and women act as the crew, hoisting sails and taking watch of the helm. With over 22,000 feet of sails and more than five miles of rigging lines, each student is expected to know and comprehend each line’s name and function and how to operate it correctly. Aside from the students who crew the Eagle during training the ship carries a functional crew of six officers and 55 enlisted sailors at any given time, each a trained and competent sailor whose mission it is to pass on the information they have earned.
Throughout the decades since her commissioning into the United States Coast Guard, the USCG Eagle has also served as a diplomatic ship, cruising to foreign countries as an ambassador, and participating in Tall Ship races. On July 1, 1972, on her return to port, the Eagle suffered a severe accident while attempting to pass below a bridge. While precautions had been taken as she made her way under the Gold Star Memorial Bridge, the new sister bridge being constructed had safety netting that hung lower than expected, catching the mainmast and foremast of the Eagle. As she passed under the new bridge both of these masts broke above the highest crosstrees, leaving large pieces of mast hanging precariously above the decks. Four years later her previously pure white hull was given its distinctive red racing stripe, creating the striking image seen today.

In 1982, 46 years after her initial christening, the USCG Eagle was outfitted with modern equipment, allowing her to continue her sailing training courses across the globe. New engines, generators, and evaporators allowed her to run cleaner, smoother, and faster, while modern gears responded instantly to changes in speed and direction, where previously there was a 30 second delay. Additionally, the propeller shaft was redesigned with the capability of de-clutching while under sail power, allowing the propellers to spin freely and alleviate otherwise costly drag. For long trips at sea she was outfitted with a reverse osmosis water system to replenish the fresh water resources. Continuing with her mission the USCG Eagle sails across the globe to this day, cruising to Australia, making appearances at fleet reviews and Tall Ship festivals, and in 2005 she returned to Bremerhaven, Germany for the first time since the end of World War II. Each year she takes one long training cruise to the Caribbean or Pacific Coast, or along the Atlantic coast of Europe and America. As of this year the USCG Eagle celebrates her 75 anniversary, still training students as she always has, still gliding through the seas as proudly as ever, and still a shining example of the beauty, grace, and magnificence of a true sailing vessel.