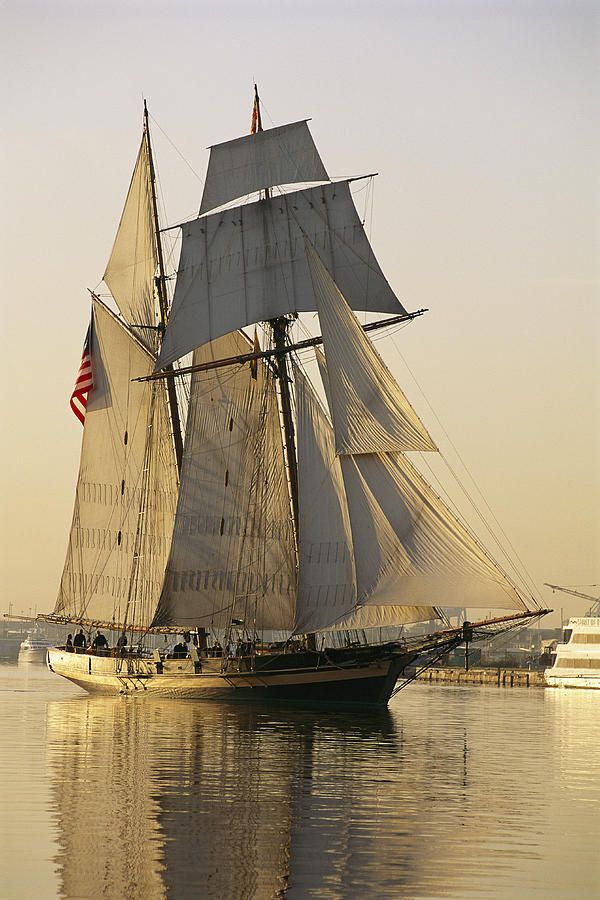 The Baltimore Clipper is one of the best known sailing vessels in existence today, with its rakish silhouette distinctive from a distance. The Baltimore Clipper has been involved in privateering, piracy, smuggling, slave trading, and there are a number of modernized Clippers sailing today on both coasts of America.

Originally known as a Virginia-built boat, the fast and lean craft that was built at Fells Point and other locations evolved over time, emphasizing speed, weatherly sailing abilities, and handling over everything else. A Baltimore Clipper type can best be defined by extremely tall and raking masts, very little rigging, low freeboard, great rake at both the stem and stern, with the keel featuring a great amount of drag from front to rear. A Baltimore Clipper features a great deal of deadrise, and slack bilges. They had a decent amount of beam for their length and were flush-decked for easy handling of guns and sails.

Influenced by the French luggers and their refined construction methods, as well as the deep and powerful Bermuda sloops with their incredible windward abilities, the early Baltimore Clippers were used by the American navy during the Revolution with great success. They were so far in advance of their times that there was no comparison with other vessels of the same time. Whenever the Royal Navy managed to capture a Clipper, the Royal Surveyors would take their lines off for study and use them in building the Royal Navy’s series of experimental brigs.

It was the War of 1812 that made the Baltimore Clipper what it is today. Over time the hullform became more and more evolved, with a finer entry and more powerful midsections. The rig evolved as well, with the basic design being a two-masted topsail schooner able to spread a massive amount of sail, with her rigging supported primarily by her massive bowsprit and bobstay. An unfortunate trend with the later types was to pitchpole or capsize at anchor. Running with the wind blowing from behind, the sails would press the Baltimore Clipper’s bow down farther and farther. With her sharp lines forward the bow wouldn’t provide enough buoyancy to counteract the force of the sails, and the ship would be driven bodily under. There was a recorded incident in the Royal Navy of an experimental brig built along Baltimore Clipper lines that pitchpoled (capsized end over end) while running in a gale.

The slave trade became the new calling for the Baltimore Clipper after the War of 1812 left a number of privateers partially-built with no owners in sight. Because the design had evolved so far during the war, it was now incapable of carrying bulk cargo in any large amount, rendering it useless as a freighter. However, because of the pressure on nations to stop the slave trade, it was no longer possible to use large vessels for slaving, as they were too easy to catch and took too long to gather enough slaves for a full cargo. The Baltimore Clipper, now even more extreme, was perfect. It was found that slaves did not strain or stress the hull as a bulk cargo would, and the ship type launched forth on another evolutionary cycle.

As a slaver, the Baltimore Clipper was built to sail as well as it could in the weather conditions of the slaving routes with the amount of weight usually carried, with speed emphasized over all. The interior of the hull was obviously different, now specialized for slaving, while the hull went through an increase of deadrise, draft, sharper waterlines for more speed, larger masts and yards for more sail area, and lighter weight. Because the Baltimore Clipper was no longer the pursuer in engagements, she became specialized for sailing under the most favorable of conditions, and more extreme in form and execution.

It was this extreme nature that spelled the end for the Baltimore Clipper as a commercial vessel. With no wars calling for privateers, and the slave trade forbidden, the Baltimore Clipper had no usefulness. She was too sharp and fine to carry a cargo, and too extreme for comfortable yachting. A few were used in the opium trade, and most of the Baltimore Clipper traits influenced the design of pilot boat schooners and other fast vessels.

The design underwent a revival during the 1970s, with a replica built to the lines of Chasseur, one of the largest and most successful of the Baltimore Clippers, a ship that, during the War of 1812, claimed to hold all of England under blockade. The original Pride of Baltimore was a successful ship, but she met a tragic end in 1986 during a white squall. A modern rendition of the Baltimore Clipper type was commissioned, and the Pride of Baltimore II was born, using current wood boat-building techniques. She is still sailing today, although it must be noted that she suffered a partial dismasting at one point when her bobstay snapped, letting her bowsprit break which caused the foremast to go by the board.

Other topsail schooners built along Baltimore Clipper lines were Lynx and Amistad, and Californian on the western coast. Howard Chapelle theorized that built to modern standards, with intelligent use of ballast and sail cutting, the Baltimore Clipper type would create a modern yacht of incredible speed and seaworthiness.